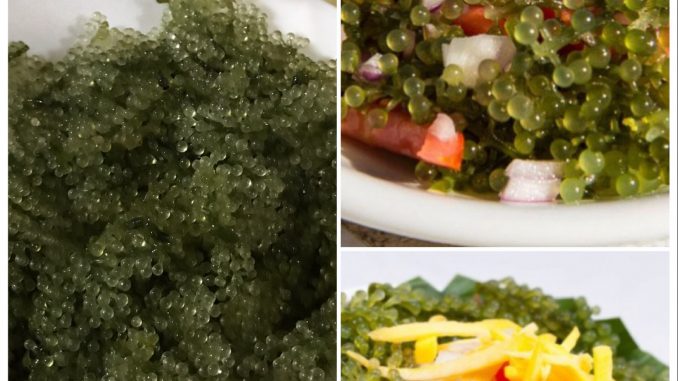 Caulerpa lentillifera is a species of bryopsidale green algae. Popularly known as “Green Caviar,” the seagrape (C. lentillifera), farmed in Japan, Southeast Asian and Pacific island countries. In the Philippines it is “late”, in Malaysia “latok” and in Japan where it is known as “umibudo”. In the Philippines preparation is through washing thoroughly and eaten plain or garnished with sliced tomatoes, onions, sliced green mangoes or the salad is dressed with sweet-sour sauce, vinegar or lemon juice, often with salt or powdered black pepper to taste. Lato is a flavored species due to its soft and succulent texture.

There are many species of the genus Caulerpa, but Caulerpa lentillifera is the two most popular edible ones. According to Review of the Nutrient Composition of Selected Edible Seaweeds by Leonel Pereira from Institute of Marine Research, Department of Life Science. From the composition of seaweed highlight: Presence of minerals with values about ten times higher than found in traditional vegetables, such as iron in Himanthalia elongata (Sea spaghetti) in comparison with that of Lens esculenta (lentils) or in the case of calcium present in Undaria pinnatifida (Wakame) and Chondrus crispus (Irish Moss), in comparison with milk; presence of proteins containing all essential amino acids, constituting a type of protein of high biological value, comparable in quality to the egg; presence of vitamins in significant quantities, in particular the presence of B12 (Porphyra spp.), absent in higher plants; Palmaria palmata and Himanthalia elongata are rich in potassium and, together with the algae of the genus Porphyra and Laminaria, have a ratio of sodium/potassium ratio considered optimal for human health. This review aims to describe some of the key nutritional characteristics of the main algae used as human food and their potential in the Nutraceuticals industry.

Compared to those reported by research presented by Leonel Pereira from Institute of Marine Research, Department of Life Science, comparison to other seaweeds, the protein content of   C. lentillifera was comparable to the red algae Palmaria, and was notably higher than some other brown algae tested, e.g. Himanthalia elongata and Laminaria ochroleuca.  Apart from iodine, C. lentillifera is also rich in phosphorus, calcium, copper and magnesium. This species is also rich in vitamin E with moderate amount of vitamin B1, vitamin B2 and niacin. The key recognized nutritional components of seaweeds are protein, fatty acids, vitamins and other phytochemicals, and also minerals (Dawczynski et al. 2007a, MacArtain et al 2007, Bocanegra et al 2009, Holdt & Kraan 2011)

Other research presented through Seaweeds Genetic Engineering seaweed shows significant opportunities in the years to come. It will build the gap in fundamentals and applied studies seaweeds. With the continuing innovation, bringing unlimited possibilities in seaweeds genetic engineering. Combination of other innovation will satisfy the demand and much benefit to human health.

Current progress in algal biotechnology is driven by an increased demand for new sources of biomass due to several global challenges, new discoveries and technologies available as well as an increased global awareness of the many applications of algae.